The Spanish tax system is modern and very competitive. The Spanish State Tax Agency has distinguished itself through its technological leadership within the Government. It is one of the most modernised European tax agencies, in the vanguard of offering electronic public services, such as obtaining tax certificates or filing tax returns online. Spain has a moderate tax burden, below the average for the EU-28 and Eurozone.

Corporate taxation Taxable income is based on the income disclosed in the financial statements. In general, the expenses relating to the business activity are deductible if they are properly accounted for and justified, and if the timing of recognition rules have been fulfilled. But, furthermore, there are additional tax incentives for some specific expenses. The General corporate tax rate is 25%, but effective tax rate may be reduced to 22.5% when applying Capitalization Reserves. In addition, there are a number of tax deductions on the company tax that reduces the average effective tax rate paid by a company in Spain.

The system of tax incentives for undertaking R&D&I activities is among the most favorable of OECD countries, both for large companies as well as for small and medium enterprises.

The Spanish Tax regulation allows the recovery of tax deductions for carrying out R&D&I activities that were not applied due to lack of allocations by means of a cash reimbursement system which, de facto, turns them into a subsidy regardless of the company's profits.

Such tax initiatives are also complemented by the “patent box” regime that exempts from tax 60% of revenues coming from the transfer of intangible assets. The “patent box” regime currently in force in Spain is the most beneficial of all those that exist within the EU in as far as the affected intangible assets are not limited to patents as is the case in other countries, but extends to revenues coming from the transfer of models, designs, formulae, plans or even know-how. In addition, Spain has a tax system that adapts perfectly to even the most internationalized companies in as far as it has a significant network of Double Taxation Conventions, especially notable with countries in Latin America, combined with the “participation exemption” regime. This regime affords companies exemption from dividends or shares in profits received from their non-resident subsidiaries in Spain, as well as from any capital gain in the disposal of said shares.

Spain also has a special tax regime for holding companies (ETVEs, or foreign-securities holding entities) which promotes the internationalization of such companies on two levels: • Establishing an exemption regime on the dividends from subsidiary companies and in relation to revenues coming from the transfer of the aforementioned shares. Being exempt from tax burden the repatriation of profits generated by foreign-securities holding entities to their non-resident partners.

Under certain conditions, the inbound expatriate must not have been resident in Spain during the 10 preceding tax periods of his or her assignment to Spain. The assignment to Spain must be the result of an employment contract. The fixed personal tax on employment income during the first six fiscal years will be 24% for all income earned up to € 600,000 and 45% on income exceeding € 600,000. The main advantage of the inpatriate tax regime is that qualifying individuals will only be taxed in Spain on Spanish source dividends, interest and capital gains. Returns from savings generated abroad will not be taxed in their PIT. 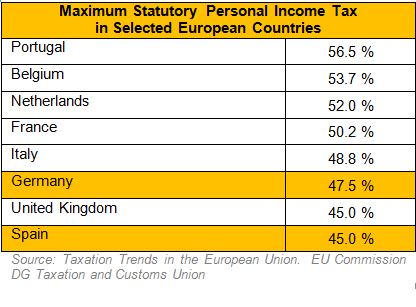