Why investing in Spain?

Spain is in an outstanding position worldwide in terms of the importance of its economy. Spain is World’s 14th-largest economy and one of the most attractive domestic markets in Europe - being the 5th-largest economy in the EU with a GDP worth 1.2 trillion USD]- with 46 million consumers, on top of the 75 million tourists who visit Spain every year. In terms of purchasing power, Spain's per capital income is significantly higher than that of some major economies ranked above Spain. 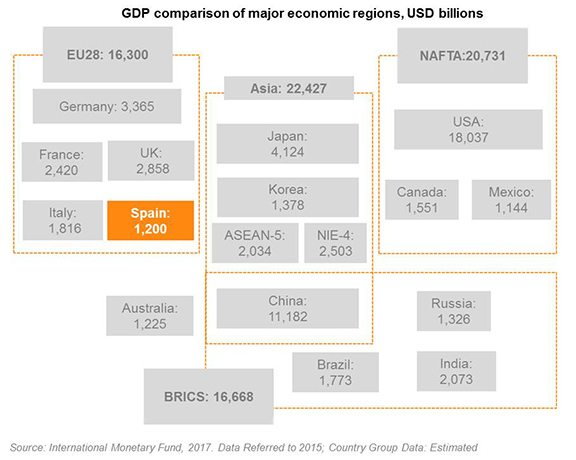 Setting up a business in Spain is simple. The type of business entities available are in line with those existing in other OECD and most advanced UE countries. There is also a wide range of possibilities to match the needs of the different types of investor who wish to invest in or from Spain. An international investor is free to choose between the numerous alternatives and channels for conducting business that offer the Spanish Law. Most frequent used are the Affiliate of a new company, setting a Branch or a Subsidiary, both under the Limited Liability Society form, or through a joint venture with other enterprises already established in Spain. Other can be also considered by the investors.

Spain has a modern and knowledge-based economy, where services represent 75% of its business activity. It is an international centre for innovation that benefits from a young, highly qualified, proactive-natured population and from their competitive costs in the context of Western Europe, especially as regards graduate and post-graduate employees.

Spain is a committed and reliable member of the Europe Union with free access to the world's largest market (EU) with 500 million people and a per capita income of USD 25,865. This means potential investors can benefit from:

- Free movement of goods and services, capital and people
- No intra-Community tariffs
- A single currency
- European programs and funds

Spain has worked hard to equip itself with state-of-the-art infrastructures, capable of fostering future growth. In addition, companies that set up business in Spain can gain access not only to the Spanish national market but also to the markets of the EMEA region (Europe, Middle East and North Africa) and Latin America, given its privileged geostrategic position, prestige and strong presence in these regions.

Consequently, the highly internationalized profile of the Spanish economy has enabled Spain to become a key platform for international business. In fact, Spain is the world's 12th largest recipient of foreign investment, which highlights the important role played by foreign investment within the Spanish economy.
Spain offers business opportunities for foreign companies in sectors and activities of high added value, which is extremely attractive for FDI due to its strong growth potential. Over the last 5 years, 1 in 3 projects received have been in sectors of high technological value and a high level of R&D&I, such as ICT, automotive industry;   pharma, biotechnology and health sciences, smart cities, environment, aeronautics and aerospace, Tourism and Business Services, among others. There are over 12,500 foreign companies in Spain across all economic sectors: Industrial, Technologicy and Services. 70 of FORBES Top 100 companies have branches in Spain and 90 out of 100 top R&D Companies have a subsidiary in Spain according to Thomson Reuters.

Spain also has a well-developed business sector boasting a high degree of internationalization and offering valuable opportunities to collaborate in third markets. Many Spanish companies operate on five continents and are known the world over. Indeed, Spain is the world's 13th largest investor in terms of stock and the 2nd major investor in Latin America. 26 of the largest Spanish Companies are part of the Forbes Global 500 major companies in the world.

Spain also constitutes an optimum port of entry for obtaining privileged access to the entire Mediterranean area, North Africa, the Middle East and, of course, Latin America, a region with which we enjoy deeply-rooted economic, business, institutional and cultural ties.
In Spain, foreign investors have exactly the same treatment as Spanish investors, with no discrimination as regards the type or size of the investment. Foreign investments in Spain do not require, as a general principle, any prior authorization, nor do they require any kind of administrative verification. Only once they have been freely carried out, investments need only be declared to the Registry of Foreign Investments in the Ministry of Economy, Industry and Competitiveness, for purely, statistical purposes.