Business in Spain - The Economy

Spain is in an outstanding position worldwide in terms of the importance of its economy. Spain is World’s 14th-largest economy and one of the most attractive domestic markets in Europe - being the 5th-largest economy in the EU with a GDP worth 1.2 trillion USD]- with 46 million consumers, on top of the 75 million tourists who visit Spain every year. In terms of purchasing power, Spain's per capital income is significantly higher than that of some major economies ranked above Spain.

Spanish exports of goods to third markets reached 255 Billion in 2017. Foreign Multinationals established in Spain account for around 40% of total exports from Spain to the rest of the world. There are an increasing number of exporting companies that are accessing new markets. 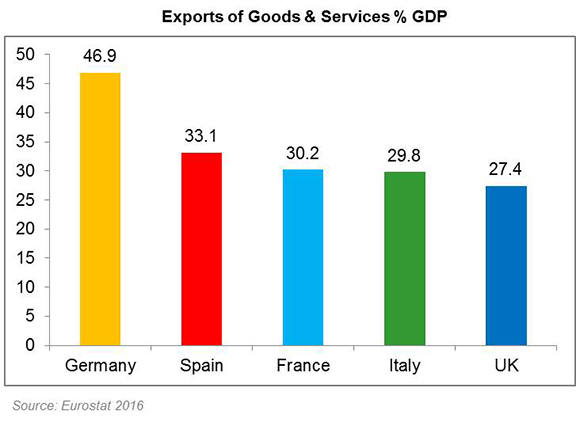 Spanish and Multinational Companies in Spain in Industrial, Technological and Services activities are increasing exports with high value added and technological content. 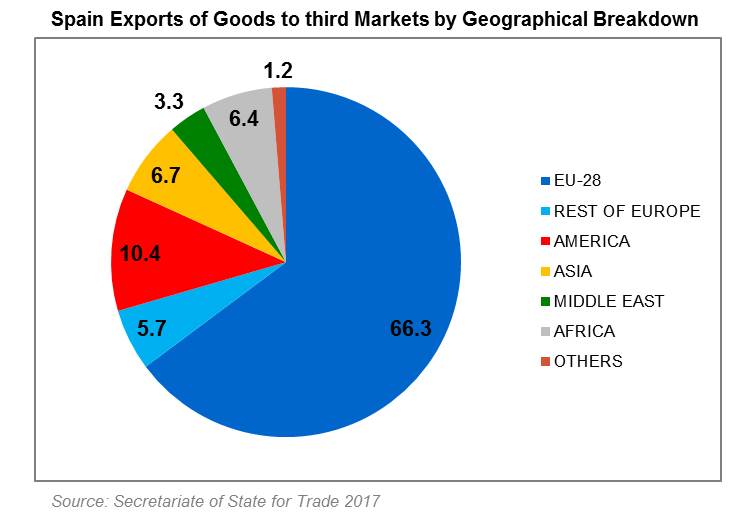 In addition, Spain is the 11th largest exporter of commercial services worldwide with 117,442 million USD. International Export Services from Spain -excluding Tourism- reached more than 63.5 Billion € in 2015. Apart from its domestic market, Spain offers a privileged situation as a gateway to the European market, Latin America and North Africa and the Middle East.

Spain is leader in advanced IC technologies related to many sectors. There are more than 30,000 ICT companies, including digital content, operating in Spain with more than 425,000 highly qualified workers.  Spain in one of the most important ICT markets in Europe. International Companies presence in Spain is working for and with Spanish Companies in Latin-American and EMEA Region.
Virtually all enterprises in Spain (98%) are connected to internet. 70.5% of companies use some Open Source Software. Access to 4G (LTE) Networks and Broadband penetration reached more than 95% in main economic urban areas and it is growing the coverage of super-fast broadband networks. There are over 120,000 stations all over the country for mobile telecommunications.
The area of integration of the digital economy refers to the degree of digitalization of companies and the use of e-commerce. Spain is above European average according to the DESI index, with 0.37 points over one. Mobile lines reached in 2015 more than 110% penetration rate. 75% of households are equipped with computers (desktop, laptop, netbook or tablet) and almost 80% of households are connected to Internet.
The dimension of digital Public Services measures the level of modernization and quality of public services via the Internet (e-Administration, e-Health…). European average is 0.55 points out of 1 and Spain is in the leading group of European countries, with 0.72 points, well above the European average.
The growth of Internet business is based on the justification that Spanish is the second most natively spoken language in the world with hearly 400 million native speakers, after Chinese Mandarin.

Spain is a major connecting hub for airlines traveling between America, Europe and the Middle East. Spain has two of ten Europe's largest airports, Madrid and Barcelona, and ranks 3rd in Europe in passenger traffic.

Due to its geographical position and maritime tradition, Spain has a magnificent port infrastructure. Spain ranks 2nd in Europe in maritime transport of goods. There are 4 Spanish Ports among top 20 European ports. Foreign Trade Rate: 60% of Exports from Spain and 75% of Imports. 53% with the EU and 96% with other countries. Valencia, Algeciras and Barcelona are among the 15 largest container ports in Europe.

Spain is the 3rd largest worldwide (1st in Europe) in High-Speed Network and the European leader with more than 3,143 km in service, travelling at an average commercial speed of 222 km/h, higher than that of Japan (218 km/h) and France (216 km/h). And a total railway network over 15,500 km. Source: ADIF

According to The Global Competitiveness Report (World Economic Forum), Spain has one of the best indexes of railroad infrastructure quality in the world, and one of the best subway systems in major cities. In technological terms, Spain is a pioneer in the field of rail R&D, through innovation in infrastructure, signaling, electrification and rolling stock, being a world reference in consultancy/engineering and construction/equipment of railways.

Spain is the largest EU highway network with 15,000 kilometers 5.9 % Spain vs 1.2% EU average or 1.4% USA.S pain boasts the number one network of freeways and highways in Europe.